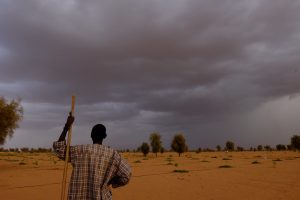 The Great Green Wall is more of a metaphor than an actual wall. It was initially conceived as a physical barrier of trees on the edge of the desert, but over the past few years, it has evolved into a hodge-podge of projects that attempt to restore degraded land and combat desertification. Thanks in part to the ongoing war in Syria, the phrase “migration crisis” is on the pages of every European newspaper, on the lips of its politicians and on the minds of voters. While Syrians dominate the news coverage, many migrants risking their lives in inflatable boats travel from sub-Saharan Africa through Libya. It’s this story that environmentalists are increasingly trying to highlight in an effort to capture the attention (and money) of European governments and international donors.

By 2020, some 60 million people [pdf] from sub-Saharan Africa are expected to migrate to North Africa or Europe because of desertification alone, and that number will only grow larger through the subsequent decades. Great Green Wall proponents now make the case that the wall is a key part of a broader strategy to stem the tide of African migrants coming to Europe’s shores – too many of whom die along the way.

“There is an emergency, and I have a feeling that people do not really get it,” says Monique Barbut, executive secretary of the UN Convention to Combat Desertification. “Most of the people who talk about migration – the press, the TV and all that – they always either say it’s because there’s a war or because they are so poor they are migrating. But why do you have wars? Why do you have economic distress which makes you migrate? It’s rare that people unearth the real roots of that question.”

Every year, some 12 million people from west and central Africa leave their home countries, and more than 75% [pdf] of this migration happens within sub-Saharan Africa. Men from landlocked countries like Niger go to the coasts of Senegal or Cote d’Ivoire and work in the ports; others, who have a bit more to spend, go to South Africa, where they can earn more than in their villages.

But today, a greater number of migrants from more developed countries like Senegal pay smugglers to bring them to Europe. This pattern is not new, but the numbers are: this is the biggest global wave of migration since the second world war, and it is only set to grow. Development successes – fewer infant and child deaths, lower rates of maternal mortality, longer lifespans – coupled with stubbornly high fertility rates mean the population of the Sahel region is set to grow by 250% in just a few decades, from 135 million people today to 340 millionby 2050. At the same time, communities that used to be desperately impoverished are doing a little better. There are more healthy young men with heavy financial obligations than in generations before, and more resources to afford the trip abroad.