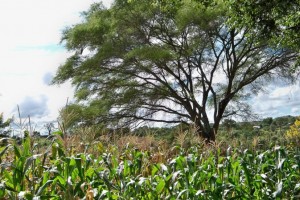 Since 1970, the population of sub – Saharan Africa has more than doubled. Land holdings have as a result shrunk in size, and many farmers, unable to leave their land fallow, now grow the same food crops, year after year, on the same plot of land. While the use of mineral fertilizers has risen tenfold in East Asia since 1970, it has remained stagnant, at very low levels, in sub-Saharan Africa. For most small farmers, the use of fertilizers that could replenish their soils is not economically feasible, due to increasing prices and climatic risks. The result is land degradation, low yields, persistent poverty and widespread malnutrition.
However, with EverGreen Agriculture, it needn’t be like this. Hundreds of thousands of smallholders across Africa nations such as Niger, Zambia and Malawi have increased their crop and soil resistance by using fertilizer trees on their land and radically improved the productivity of their land. EverGreen Agriculture provides new options to better care for the land and increase smallholder food production.

LINK By Dennis Garrity in 2016
LINK By EverGreen Agriculture Partnership in 2015
PDF By Finlayson R., Paramita E. in 2013
LINK By Chris Reij, Gray Tappan, and Melinda Smale in n.d
PDF By Garrity, Dennis P. in n.d

The method of restoring degraded lands efficiently contributes to climate change mitigation. Integrating trees in agricultural systems helps rural communities adapt to climate change, mitigate its impact and improve their livelihoods. Particularly for farmers in the Sahel, trees growing on agricultural land play an important role: they do not only prevent soil erosion but provide a wide range […] Continue Reading

More people, less erosion – Ethiopia’s Tigray region demonstrates that this can be a reality: They will take home the Gold Future Policy Award 2017, beating 26 other nominated policies to the prize. Also known as “Oscar for Best Policies”, the Future Policy Award highlights the world’s best policies that combat desertification and land degradation […] Continue Reading

A quiet, green miracle has been growing in the Sahel. Farmers in the western Sahel have achieved a remarkable success by deploying a secret weapon often overlooked in wealthier places: trees. Not planting trees. Growing them. Chris Reij, a Dutch environmental specialist at VU University Amsterdam who has worked on agricultural issues in the Sahel […] Continue Reading

Trees for Food Security Project goal is to enhance food security for resource-poor people in rural Eastern Africa through research that supports national programmes to scale up the use of trees within farming systems in Ethiopia and Rwanda and then scale out successes to relevant ago-ecological zones in Uganda and Burundi. Through the project, 5 […] Continue Reading

Two billion people live in the drylands, which cover 41 percent of the world’s land area. Far from being bare and lifeless, these drylands contain trees and forests essential to the lives of people and animals, supplying basic needs such as food, medicine, wood, energy, and fodder for livestock. But every minute, we lose 23 […] Continue Reading

Originally published on the World Resources Institute website.       With growing awareness of the economic costs of land degradation, political leaders are adopting ambitious targets to restore degraded forests and agricultural land.  Building on the interest in forest landscape restoration generated by the Bonn Challenge, in 2014, countries adopted the New York Declaration on […] Continue Reading