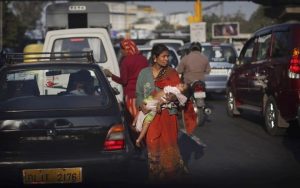 It is a distinction that no country wants: the place with the most people living in extreme poverty.

For decades, India remained stubbornly in the top spot, a reflection of its huge population and its enduring struggle against poverty.

Now, new estimates indicate that Nigeria has knocked India out of that position, part of a profound shift taking place in the geography of the world’s poorest people.

According to a recent report from the Brookings Institution, Nigeria overtook India in May to become the country with the world’s highest number of people living in extreme poverty, which is defined as living on less than $1.90 a day. The threshold captures those who struggle to obtain even basic necessities such as food, shelter and clothing, and takes into account differences in purchasing power between countries.

The Brookings report was based on estimates generated by the World Poverty Clock, a model created to track progress against poverty in real time. As of Monday, its figures showed that India had 70.6 million people living in extreme poverty, while Nigeria had 87 million.

What’s more, the gap is widening: The number of people living in extreme poverty in India is falling while the opposite is true in Nigeria, where the population is growing faster than its economy. Extreme poverty rises in Nigeria by six people each minute, according to calculations by the World Poverty Clock. Meanwhile, the number of extreme poor in India drops by 44 people a minute.

“It’s a good news story for India, coupled with some caveats, and it’s a real wake-up call for the African continent,” said Homi Kharas, director of the global economy and development program at the Brookings Institution.