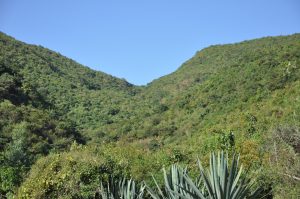 In 2008, decades of continuous clearing of trees for charcoal and firewood had left thousands of hectares of hills barren, exposing the residents to severe drought and starvation. To address this degradation, and the negative effects it was having on the community, the Humbo FMNR project began. World Vision’s intervention brought the forest back, transforming the lives of hundreds of families living around hill bottoms.

Thirty-five year old Aster Tantu married to Ergado Urgu, 45, and gave birth to six children explained the situation, “We used to cut trees on the hills unwisely for charcoal and the trees were dwindled year after year. When it was raining, our land used to be covered with huge infertile mud and stones washed down from the top of the hills. I used to harvest less than 200kg of maize from my one hectare of land in a year.”

As a result of the villagers’ own actions and erosion, the land was left with bare hills where there were stones all over the place which made farmland around hill bottoms very infertile. Families living around hill bottoms used to experience the terrible effects of hunger and starvation frequently.  “My family of seven did not get even one meal a day and usually go to bed hungry for more than six months of the year, “Aster remembered her horrible experience.