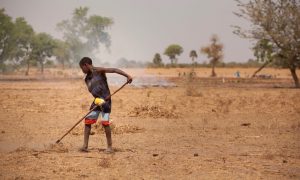 Researchers from the International Food Policy Research Institute (IFPRI) have published an extensive report highlighting the effects of climate change on agriculture and global nutrition. The report, Climate Change and Variability: What are the Risks for Nutrition, Diets, and Food Systems?, compiles evidence-based research to provide a detailed look at food security, agriculture, and food systems in relation to climate change. The authors also examine future projections in these areas, seeking to acknowledge the complexity and importance of those relationships as both global population and global temperatures rise.

In an introductory post, the reports’ authors urge more research and action, calling the task of ensuring adequate global nutrition for all “the challenge of our lifetime.” The authors cite research projecting that at current rates of climate change, “it is likely that global food production will decline by two percent every decade until at least 2050, just as the world’s population is expected to reach 9.7 billion people.”

Persistent drought and other changes in weather patterns are already resulting in famine for millions of vulnerable people.

A 2016 report modeled the effects of this climate change on global health, estimating “excess mortality attributable to agriculturally mediated changes in dietary and weight-related risk factors,” and predicted half a million agricultural climate-related deaths in this time period.

The IFPRI authors state that nutritional status, ultimately leading to morbidity and mortality, “can be exacerbated by the effects of climate change at all stages of the food value chain.”

Featuring seven focal areas through a food system lens, the report brings together research on each piece of the food value chain and anticipated challenges posed by climate change. The authors suggests both climate change mitigation and adaptation strategies using a nutrition-sensitive approach that is also climate-aware.