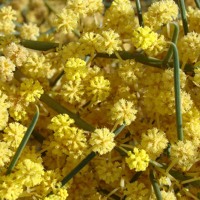 Australian Acacias – Bringing food to the hungryAustralian acacias have evolved to grow in a wide range of environments, including the driest of dry areas.  Due to the lack of large herbivores in Australia as there is in Africa, many of these species have not developed techniques such as seed toxicity, bitterness or elaborate thorns to protect themselves from browsing.  As a result many of these species produce an abundance of edible seeds, that can provide a source of food during the hungry months of the dry seasons.

Over the last 10 years or more, World Vision Australia has been working with partners to test and introduce such species to highly food insecure areas of Niger and Ethiopia, and to develop food products that can supplement traditional ingredients in lean periods.  These endeavours have had increasing success, with new commercial products now available on the market, and new industries emerging, based on these Edible Acacias.

These species are also particularly suited to EverGreen Agriculture systems, bringing shade and organic matter to very marginal cropping land, while also providing a source of fodder and firewood as well as food for farming families

Radio National in Australia, recently covered these discoveries and the work that Food Security and Climate Change team at World Vision Australia are doing to take these successes around the world.