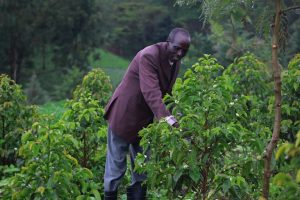 According to Muriuki, agroforestry helps reduce pests and disease, enhances nutrient cycling — since trees are deep-rooted and can draw nutrients from below the soil and bring them to the top — while decomposed leaves enrich the crop when they rot, improving soil health.

Trees also improve microclimates through the capture of moisture and store carbon dioxide. Under the Paris Agreement that aims to reduce global temperatures well below 2 degrees Celsius (3.6 degrees Fahrenheit) above pre-industrial levels, and pursuing efforts to limit the temperature increase further to 1.5 degrees Celsius (2.7 degrees Fahrenheit), Kenya has committed to reducing carbon emissions by 30 percent by 2030. The country aims to achieve this goal while increasing tree cover from the current 7 percent to at least 10 percent by 2030 through agroforestry.

Today, the Cherangani are assimilated among communities adjacent to the Cherangani Forest, having adopted farming and the raising of livestock. They also practice their traditional agroforestry, but they must implement it outside the forest, as the government no longer recognizes their hunter-gatherer way of life.

Despite a majority having settled on the farms allocated by the government, about 5,000 people on the eastern block live within the forest boundaries as squatters, with no title deeds, while the rest are distributed in the three administrative counties of Trans-Nzoia, West Pokot and Elgeyo-Marakwet, around the Cherangani Hills.