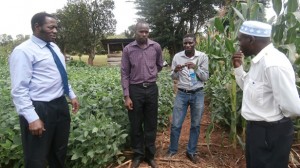 Poor soils make people poor. The people living in the area that borders Lake Victoria in Uganda know this for a fact: They have seen maize yields on their small plots of land dwindle, as they can often not afford the fertilizer the nitrogen-hungry crop requires to grow strong. Income and nutrition levels drop. The community faces a struggle to escape from poverty.

Yet a Humidtropics intervention led by the International Institute of Tropical Agriculture that takes an integrated approach to tackling the triple challenge of poverty, hunger and environmental degradation all at once has offered hope, by turning to an unlikely hero: soybean. With the help of partners such as the national research organizations of Uganda, development partners such as World Vision and Bioversity International and with help from the local government the humble soybean has helped to transform lands and livelihoods.

As a legume, soybean naturally fixes nitrogen to soil, a nutrient sorely needed in the degraded lands of this region. This leaves the land capable of nourishing maize crops planted either at a later date or alongside the soybean. During a trial period in the Kiboga district, soybean yields were abundant, but this presented new challenges. Farmers did not know how to process this new crop, and as demand for soybean seed increased, so did the challenge for farmers to access quality seeds, since the local market is poorly developed.

To combat this, Humidtropics researchers enlisted the help of both the public, and the private sector. In September 2014, Makarere University taught local groups how to multiply quality seeds and how to utilize soybean in the household.

One man who participated in this training, Majid, is a school headmaster. After what he learned about the uses and nutritional quality of soybean, he decided to include soy in the maize porridge the children at his school were served at breaktime and lunch. Local government learned about the lessons and brought the headteachers of district schools together to make it a practice adopted across the region. This strategy is now being adopted in schools across the area to improve the nutrition levels of children and subsequently their performance at school.