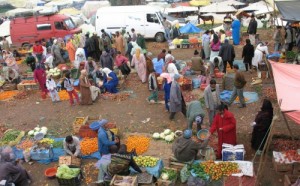 Winter has arrived in Morocco. From December to March, there is a lot of rain (more than the rest of the year) – and widespread availability of wild vegetables. Although wild foods, especially wild vegetables, have held an important place in Moroccan culinary practice for generations, up until recently, they have been largely overlooked by research and policy initiatives. But, two recent publications have changed this. In one recent publication, Nassif and Tanji, reported almost 80 species of edible vegetables in Morocco.

A study  published by CIFOR last April showed that in a community in the Rif Mountains, 84 percent of households had used wild vegetables in the last seven days and wild vegetables were eaten up to four times a week. This work suggests that rural Moroccan communities are using their agricultural landscapes in diverse ways. Wild vegetables are collected from fields, field margins, roadsides and streambeds: diversity within the landscape ensures local communities have access to more than just staple crops.

The study also looked at the geographic distribution of knowledge and use of wild leafy greens across three sites in Morocco and found significant variation, not only between regions, but also between villages in the same region. For example, in the north, Calendula arvensis and Erodium moschatum are regularly consumed, while women in the High Atlas Mountains to the south say these species are not eaten, even though they grow there as well.

In the north, women in one village call the genus Calendula “Karn kebsha,” while in a village only 40 kilometers away, it is called “Mesk azara.” There was a greater overlap in the knowledge of wild vegetables among villages that use the same market. We think that this is because markets act as a site where knowledge is transmitted and a place where social and cultural values, tastes and dietary habits are shaped. We conclude that markets could have an important role in preserving the diversity of rural agricultural systems and landscapes in Morocco.