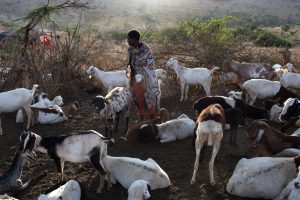 Kenya has a land problem. Africa itself has a land problem. The continent seems so vast and the land so open. The awesome sense of space is an inextricable part of the beauty here — the unadulterated vistas, the endless land. But in a way, that is an illusion.

Population swells, climate change, soil degradation, erosion, poaching, global food prices and even the benefits of affluence are exerting incredible pressure on African land. They are fueling conflicts across the continent, from Nigeria in the west to Kenya in the east — including in Laikipia, Kenya, a wildlife haven and one of the country’s most beautiful areas.

Large groups of people are on the move, desperate for usable land. Data from NASA satellites reveals an overwhelming degradation of agricultural land throughout Africa, with one recent study showing that more than 40 million Africans are trying to survive off land whose agricultural potential is declining.

At the same time, high birthrates and lengthening life spans mean that by the end of this century, there could be as many as four billion people on the continent, about 10 times the population 40 years ago.

It is a two-headed problem, scientists and activists say, and it could be one of the gravest challenges Africa faces: The quality of farmland in many areas is getting worse, and the number of people squeezed onto that land is rising fast.