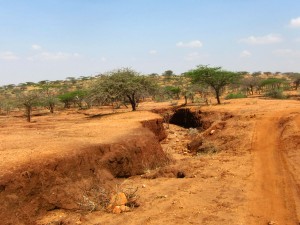 The global community has set forth a new goal to tackle the scourge of land degradation and desertification. It could be real breakthrough.

The United Nations Convention to Combat Desertification (UNCCD) had a ‘breakthrough moment’ after two weeks of discussions and negotiations in Ankara, Turkey in October. The 195 parties to the Convention agreed to a global deal that set a new environmental target: Achieving “land degradation neutrality” by 2030, and thus maintaining the world’s stock of healthy, productive land at a stable level.

Currently, 12 million hectares of land is being degraded annually via deforestation and forest degradation, the degradation and loss of agricultural land, and rampant infrastructural development. But the new deal at Ankara commits the UN’s members, albeit on a voluntary basis, to restore or rehabilitate at least that much land area every year, which at least will keep things from getting worse. If that goal can be achieved by 2030, then the global community can look toward an even more ambitious target to gradually enable a major net increase in healthy land in future decades.

The Land Degradation Neutrality target had already been included in the Sustainability Development Goals that were agreed by the UN General Assembly this past September. But the UNCCD decision takes that a major step further by setting in motion a framework whereby the target can be achieved through practical actions on the ground by virtually all countries.

The endorsement also entails an expansion in the role of the UNCCD. The Convention had previously focused on attempting to counter the rapid degradation or desertification of productive drylands, especially in Africa. It will now actively promote and assist land degradation neutrality in non-arid areas across the world as well. The scientific definition of land degradation neutrality that was adopted by the conference applies universally to all countries, and thus a significant shift has occurred.

“That is the fundamental change that has taken place,” noted UNCCD executive secretary Monique Barbut.

The agreement is likely to have an impact on the UN climate change conference that is convening in Paris in early December, following close on the heels of the UNCCD meetings. Ms Barbut stressed the enormous climate benefits of reclaiming degraded land. These include not only making farming more resilient to climate change through the adoption of such practices as agroforestry, and evergreen agriculture in particular, and increasing food production in rainfed environments, particularly on millions of smallholder farms, but also in sequestering huge amounts of carbon dioxide.

She noted that the full achievement of the land restoration target could reduce global warming by half a degree C. This will help substantially to close the gap between the sum of what countries have so far voluntarily committed to reducing their emissions of greenhouse gases, and the level of emissions reduction that is needed to limit global warming to 2 degrees C: The level currently estimated to be essential to avoid catastrophic climatic consequences.

The new global deal opens a wide new window of opportunity for EverGreen Agriculture impact in the coming years.