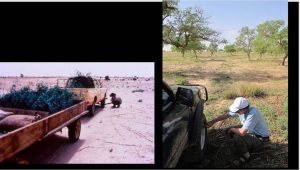 In his 1861 seminal book “Man and Nature”, George Marsh wrote these haunting words: “A territory larger than all Europe, the abundance of which sustained in bygone centuries a population scarcely inferior to that of the whole Western world at the present day, has been entirely withdrawn from human use, or, at best, is thinly inhabited…. there are parts of Asia Minor, of Northern Africa, of Greece, and even of Alpine Europe, where the operation of causes set in action by man has brought the face of the earth to a desolation almost as complete as that of the moon; and though, within that brief space of time which we call ‘the historical period,’ they are known to have been covered with luxuriant woods, verdant pastures, and fertile meadows.”

This level of destruction had been attained by the time world population had only reached a little over 1.2 billion. Bulldozers had not yet been invented and no forest had been laid low through the insatiable appetite of the chainsaw. Today we stand at a cross road. The massive cloud bursts of deforestation, land degradation, climate change and population growth are converging into a perfect storm, moving inexorably towards us and poised to engulf all in its path.

The world has long known that people need trees. At this critical time in history, it is now time to know, and to act on the fact that more than ever, trees need people, for the sake of the earth, and for the sake of all the earth’s inhabitants, including human kind. It is time to move beyond comprehension of, and remorse for the damage we have done. It’s time to act. Knowledge and sentiment will not save us from this impending peril of our own making. Fortunately, at the very time when unparalleled action is called for, we have a tool commensurate to the task of countering the enormous challenges before us. It is time for decisive action.

That tool is FMNR

Learn more through the book The Forest Maker by Johannes Dieterich. This book tells the story of FMNR, from its origins in Niger to its spread to 25 countries today.