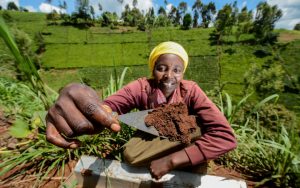 A 2016 study in the Nature journal showed that carbon sequestered by trees on agricultural land could be more than four times higher than previously thought. The research was carried out by a team of scientists from several organizations, including CIAT.

Between 2000 and 2010, tree cover on agricultural land increased by 3 percent globally, resulting in a 4.6 percent increase in biomass carbon. Yet while the importance of carbon stored and sequestered by forests is widely recognized and land cover changes well monitored – see for example Terra-i – carbon stored by trees on agricultural land needs to be better measured.

Since trees stay in the soil for many years, their biomass contributes to a build-up of carbon over the long term. Growing more trees on farmland could be a significant route to increasing carbon sequestration, above and below ground.