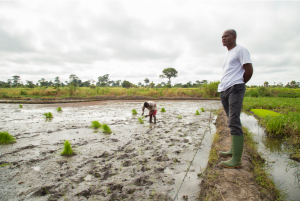 Here’s something you may not be aware of: agriculture and changes in land use already contribute 25 percent of greenhouse gas emissions. It’s a statistic that matters in the face of two unrelenting challenges now facing the globe –how to turn the promises of last December’s historic Paris climate change agreement into reality and how to feed a growing global population.
Already more than one billion people on the planet are now undernourished, and the world needs to produce at least 50 percent more food by 2050 to feed an estimated nine billion people. And we have to achieve that while delivering on the Paris agreement to keep the global temperature rise well below two degrees Celsius and to drive efforts to limit the temperature increase even further to 1.5 degrees Celsius above pre-industrial levels.

On a continent like Africa, we already know climate change is taking a toll on farmers seeking to feed their families and earn some income. Just consider West Africa, where shorter and more erratic rainy seasons and more frequent extreme weather events such as droughts and floods have impacted harvests. And according to projections, climate change could cut yields even more – by as much as 25 percent in the future.

To help them adapt to the changing climate, farmers in West Africa have been learning the benefits of “climate-smart agriculture” – an integrated approach that helps farmers grow more, be more resilient to climate change and reduce greenhouse gas emissions from livestock, crops, and land use change.