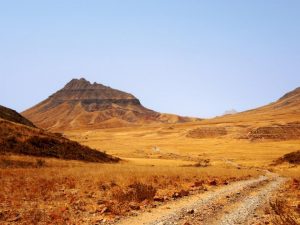 The Aral Sea in Central Asia started to shrink in the 1960s, when the Soviets diverted water from the two main rivers that flowed into it to feed vast new cotton fields. Today, the Sea is just is 10 per cent of its historic size.

The sandy dryland uncovered by the retreating water has become contaminated with pesticide run-off and triggered dust storms, causing local health problems. But now the Government of Uzbekistan is implementing a plan to green the dried-up seabed with millions of trees.

Their choice: the saxaul tree, a shrub-like species native to the deserts of central Asia, and now the first line of defense against climate change in Uzbekistan.

“One fully grown saxaul tree can fix up to 10 tons of soil around its roots,” Orazbay Allanazarov, a forestation specialist told the BBC.

The trees stop the wind picking up contaminated sand from the dried-up seabed and spreading it through the atmosphere. The plan is to cover the entire former bed with a forest. Forests are the source of 80 per cent of the world’s terrestrial biodiversity.

The trees are planted in rows 10 metres apart, so that when they mature and release seeds of their own, the gaps between the rows will be populated too. So far, around half a million hectares of the desert have been covered with saxaul trees. But there are still more than three million hectares to be covered. At the current pace, it could take 150 years to grow a forest to cover the entire area.

“We need to speed up the process. But for this we need more money, more foreign investment,” says Allanazarov.

Land is limited. Only about one third of our planet is land, and it’s coming under pressure from increasingly numerous and wealthy human populations. However, land degradation neutrality is achievable through problem solving, strong community involvement and cooperation at all levels.