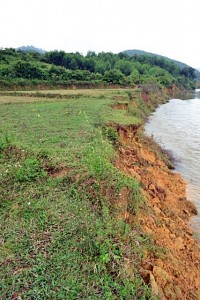 To reach a practical understanding of climate-change impacts and local people’s response, the researchers and partners involved in the Climate-smart, Tree-based, Co-investment in Adaptation and Mitigation in Asia (known as Smart Tree-Invest) project have been asking what are the consequences of a changing climate for people in Hương Lâm Commune in Hà Tĩnh province and Hương Hóa Commune in Quảng Bình province, Central Viet Nam? What are the local solutions to cope with the challenges? Can they be shared with other villages throughout Viet Nam?

As one of the ways to find answers to these questions, we used a method called Photovoice to help farmers become more aware of extreme weather patterns, the risks associated with natural disasters, the possible responses and the general impacts of climate change. Photovoice is designed for farmers to take the lead and tell their stories via photographs so that the research team—and other interested people—can more fully understand their needs and aspirations.

In Hương Lâm Commune, Ms Nguyễn Thị Côi’s farm land had been most affected by landslides and drought. She escorted the research team to her land—nearly half of which had been lost to landslides since 2010—and took photos of the area. Through this method, the team obtained firsthand experience of the losses local farmers had suffered owing to harsh conditions.

Ms Côi emphasized that, ‘We suffer from both landslides and drought owing to a lack of water in the dry season. Consequently, we manage to cultivate only one crop a year’.