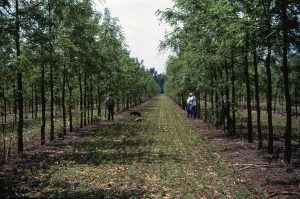 Annual row crops dominate agriculture around the world and have considerable negative environmental impacts, including significant greenhouse gas emissions. Transformative land‐use solutions are necessary to mitigate climate change and restore critical ecosystem services. Alley cropping (AC)—the integration of trees with crops—is an agroforestry practice that has been studied as a transformative, multifunctional land‐use solution. In the temperate zone, AC has strong potential for climate change mitigation through direct emissions reductions and increases in land‐use efficiency via overyielding compared to trees and crops grown separately. In addition, AC provides climate change adaptation potential and ecological benefits by buffering alley crops to weather extremes, diversifying income to hedge financial risk, increasing biodiversity, reducing soil erosion, and improving nutrient‐ and water‐use efficiency. The scope of temperate AC research and application has been largely limited to simple systems that combine one timber tree species with an annual grain. We propose two frontiers in temperate AC that expand this scope and could transform its climate‐related benefits: (i) diversification via woody polyculture and (ii) expanded use of tree crops for food and fodder. While AC is ready now for implementation on marginal lands, we discuss key considerations that could enhance the scalability of the two proposed frontiers and catalyze widespread adoption. 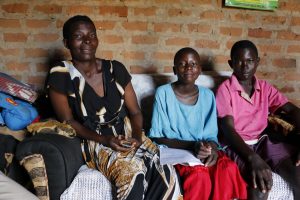 Rebecca Mukyala, a 48-year old single mother of two, keeps the key to the community warehouse — built by WFP in Nambaale sub-county in eastern Uganda in 2015. She is the marketing manager of a group of over a thousand small-scale farmers who jointly manage the premises. Roughly half of them are female heads of households.

During the harvest season the warehouse opens every day, with group members bringing their dried crops, some from as far as 10 kilometres away. The farmers who live closest to the 300-metric-ton-capacity structure are responsible for keeping the warehouse and its surroundings clean. The sub-county provides policemen who guard it at night.

“Before we stored our grain in that youth centre,” Rebecca says, pointing at a grey concrete building with lots of windows. “But we lost much of it to rodents and rain water. With this warehouse we don’t encounter any such losses.”

WFP has built or subsidized 70 similar warehouses in 40 districts in Uganda as part of a wider effort to assist the government address root causes of hunger using market-driven solutions. Small-scale farmers in the country are at particular risk of hunger due to their low crop production combined with high post-harvest losses.

WFP’s development programme is addressing these challenges by improving farmers’ skills, building infrastructure, subsidizing modern storage equipment and providing a market for quality grain. All contributing to farmers being able to grow enough surplus crops to sell and earn a decent living to provide for their families.

The warehouses act as agricultural business hubs with WFP’s NGO partners and the district local government training farmers in agronomic skills, governance, financing, value addition, warehouse management (including quality control) and business planning. The farmers can also access inputs and group loans and have the opportunity to bulk and market their grain together, getting a better price for their crops. Buyers wanting to buy grain in bulk also now know where to come.

Now that almost 50 countries from around the world have pledged to restore 160 million hectares of deforested or degraded land, it is time to put down roots by turning those promises into flourishing landscapes that benefit local communities, said top government officials who met March 16-17 in Foz de Iguaçu, Brazil.

One key is the involvement of local governments and local communities, delegates said.

But while each country has pledged a certain number of hectares, both the work of landscape restoration and its benefits are executed at a very local level.

And the details vary from place to place, as restoration experts found in Malawi when they set out to devise a plan for meeting the country’s target of bringing 4.5 million hectares under restoration by 2030. A commission traveled to every district in the country, meeting with local government officials, traditional community leaders and members of local communities, said Clement Chilima, Malawi’s director of forestry.

The goal was to “find out from (those people) what they, as owners of the land, think are degraded areas,” he said.

The definitions of degradation differed, but people generally used the word to describe “an area that is no longer as useful as it used to be,” Chilima said. “Mainly, it is the lost use of land.” 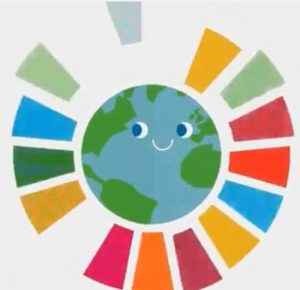 Only 12 Years & 259 Days left to make #SustainableDevelopmentGoals #SDGs a reality.