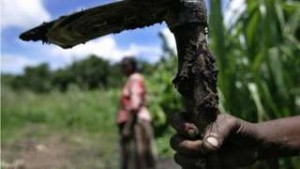 Modernising Africa’s agriculture sector to attract young people will help tackle youth unemployment and food insecurity, a report has suggested. The findings were outlined in the 2015 African Agriculture Status Report. Despite the dominance of agriculture in many economies, outdated land-tenure systems and poor access to finance deter new entrants to farming, it said.

The call for action was presented at the African Green Revolution Forum, which is being held in Zambia. The report, produced by the Alliance for a Green Revolution in Africa (Agra), warns that the continent will not solve its chronic food shortages or worrying unemployment levels among its youth without wholesale changes. In 2015, the African Union issued a declaration to double food productivity and halve poverty by 2025. 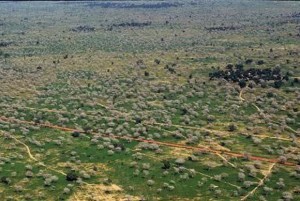 ‘Around 20–25% of global land is degraded, affecting 1.5 billion people’, said Ermias Betemariam, land-health scientist with the World Agroforestry Centre (ICRAF), speaking at a session on land restoration at ICRAF’s annual Science Week in Bogor, Indonesia, on 14 September 2015. ‘The world has been set many challenges to try and turn this around and we see this as an opportunity for greater use of agroforestry systems that address multiple restoration needs’.

‘The whole global agenda is now focussed like never before’, confirmed Dr Dennis Garrity, drylands ambassador for the UNCCD, senior fellow with ICRAF and the World Resources Institute and chair of the EverGreen Agriculture Partnership and Landcare International. ‘Policy makers are becoming serious about restoration and they are realising that agroforestry is probably three-quarters of the total restoration effort. On the 2 billion hectares of degraded land on the planet, agroforestry is going to dominate the restoration agenda because the key is “restoring in mixed-mosaic systems”. By that, we mean holistic restoration that includes croplands and rangelands and agroforests at the landscape level’. 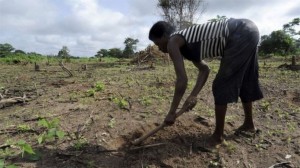 A lack of investment will derail efforts to ensure Africa’s farmers can feed future generations in the face of climate change, a report has warned. Food shortages, malnutrition and migration will undo decades of development unless more funding is made available, the authors added. Failure to act could jeopardise UN global development goals, they warn. The findings were compiled by the Montpellier Panel, a group of experts from Europe and Africa.

The report – The Farms of Change: African Smallholders Responding to an Uncertain Climate Future – recommended that international donors and governments took action in a range of priority areas, including:

Montpellier Panel chairman Prof Sir Gordon Conway observed: “Progress made in the last two decades to combat hunger and poverty in Africa will be irrelevant if action is not taken on climate change.

“African smallholders cannot escape poverty unless they are equipped to adapt to a changing climate – and this requires serious, large-scale investments,” he added.

Ensuring that the world’s food needs are met by 2050 will take doubling of global food production. To improve agricultural yields on that scale will require a radical rethink of global water-management strategies and policies.

Sub-Saharan Africa is the epicentre of this challenge. The region’s population is set to more than double by 2050 billion, or 25% of the world’s projected population. Half of its current one billion inhabitants live in extreme poverty, one-quarter is undernourished, and one-fifth faces serious water shortages. Although almost two-thirds of the population are rural, agriculture on much of the land is limited by scarce, variable and unpredictable water resources. 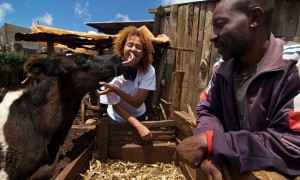 A mobile phone database for dairy farmers and a strain of sweet potato that can help fight child blindness. these are just two of the imaginative new ideas that are tackling Africa’s old problems.

Idea: The Hippo water roller is a drum that can be rolled on the ground, making it easier for those without access to taps to haul larger amounts of water faster.

Problem: Two out of every five people in Africa have no nearby water facilities and are forced to walk long distances to reach water sources. Traditional methods of balancing heavy loads of water on the head limit the amount people can carry, and cause long-term spinal injuries. Women and children usually carry out these time-consuming tasks, missing out on educational and economic opportunities. In extreme cases, they can be at increased risks of assault or rape when travelling long distances.

Method: The Hippo roller can be filled with water which is then pushed or pulled using a handle. The weight of the water is spread evenly so a full drum carries almost five times more than traditional containers, but weighs in at half the usual 20kg, allowing it to be transported faster. A steel handle has been designed to allow two pushers for steeper hills. “Essentially it alleviates the suffering people endure just to collect water and take it home. Boreholes or wells can dry out but people can still use the same roller [in other wells]. One roller will typically serve a household of seven for five to seven years,” said project manager Grant Gibbs.

Verdict: Around 42,000 Hippo rollers have been sold in 21 African countries and demand exceeds supply. Costing $125 each, they are distributed through NGOs. A mobile manufacturing unit is set to begin making them in Tanzania. Nelson Mandela has made a “personal appeal” for supporting for the project, saying it “will positively change the lives of millions of our fellow South Africans”. Monica Mark 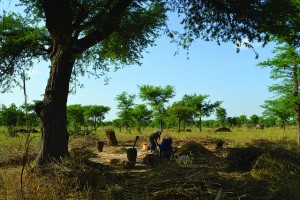 Land restoration is a key theme at the 2015 Global Landscapes Forum (GLF), the biggest side-event of the climate change negotiations in Paris in December. The World Agroforestry Centre (ICRAF) is hosting a discussion on the role agroforestry can play in restoring landscapes. The following is an interview with session organizer Henry Neufeldt, Head of Climate Change at ICRAF.

Why is agroforestry an important instrument for landscape restoration? Trees on farms have many benefits. They create microclimates, enable carbon sequestration, support biodiversity, improve soil fertility and health, and provide nutrition. Most of these effects increase the resilience of the ecosystem by helping it to adapt and mitigate negative impacts/shocks. Fertilizer trees are particularly useful for land regeneration, soil health and food security; fruit trees are important for nutrition.

How did you realize the potential of agroforestry for landscape restoration?

It only works if there is a net positive return on investment. While the long-term positive benefits are evident, short-term returns are critical and need an integrated approach including annual crops and marketable products. People have to see that it works. This is necessary for short-term adoption rates and the long-term success of landscape restoration.

Landscape restoration through agroforestry contributes to climate change mitigation and adaption and to other ecosystem services; and it improves the livelihoods of smallholder farmers. Our discussion at the Global Landscapes Forum 2015 will focus on tree-based approaches to regaining ecological functionality and enhancing human well-being across degraded farming landscapes in the tropics.