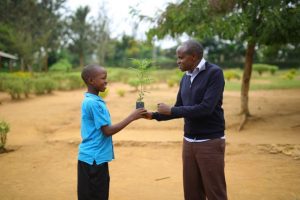 Jean Baptiste Mutabaruka is on the road to the local bank, again. When he gets there, he will inquire once more about raising money for an idea he thinks will reduce poverty in his small farming community of 60,000 in the province of Eastern Rwanda.

For 10 years, Jean Baptiste has journeyed through the parched villages of the Karangazi Sector, even in soaring heat, to champion the planting of trees, which he sees as a potent antidote to widespread poverty in the region.

According to research conducted by WRI, he is right. Planting and protecting trees would likely lead to increased land productivity, as well as improving food and water security. The Tigray region of Ethiopia halved its poverty level through restoring land over the last 20 years.

But the bank has not been able to fund him on a regular basis. He will have to find the money to buy the seedlings, to plant and protect trees as they grow, to support students to help, to purchase the tools for his work, somewhere else.

If the bank doesn’t bite this time, Jean Baptiste doesn’t know where he will turn. He waves to students in the nearby school, who play football on the dusty, red earth. Probably he will return to evangelizing his cause on his travels.

“I see that it’s possible to change it,” he says.

Originally published on the WRI site.