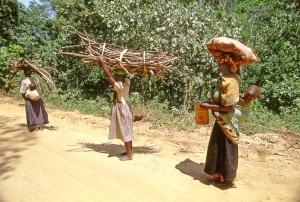 In recent years there has been significant movement toward land acquisition in developing countries to establish forestry plantations for offsetting carbon pollution elsewhere in the world. This is often referred to as land grabbing.

These carbon trading initiatives work on the basis that forestry plantations absorb carbon dioxide and other polluting greenhouse gases. This helps to undo the environmental damage associated with modern western lifestyles.

But are carbon markets – and the feel good stories that have sprung up around them – all just a bit too good to be true?

There is mounting evidence that forestry plantations and other carbon market initiatives severely compromise livelihoods and ecologies at a local level. The corporate land grabs they rely on also tend to affect the world’s most vulnerable people – those living in rural areas.

But such adverse impacts are often written out of the carbon market ledger. Sometimes they are simply justified as ‘externalities’ that must be accepted as part of ensuring we avoid climate apocalypse.

Green Resources is one of a number of large-scale plantation forestry and carbon offset corporations operating on the continent. Its activities are having a profound impact on the livelihoods of a growing number of people. Norwegian-registered, the company produces saw log timber and charcoal in Mozambique, Tanzania and Uganda. It receives carbon revenue from its plantation forestry operations.

In Uganda, the focus of our research, Green Resources holds two licenses over 11,864 hectares of government-owned, ‘degraded’ Central Forest Reserve. Historically, villagers could access this land to grow food, graze animals and engage in cultural practices.

Under the licensed land agreement between Uganda’s government and Green Resources, more than 8,000 people face profound disruptions to their livelihoods. Many are experiencing forced evictions as a direct result of the company’s take over of the land.