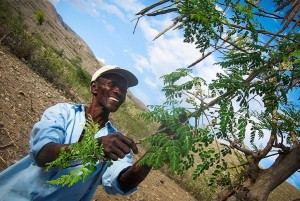 Haiti is the most impoverished country in the northern hemisphere, and trees, or the lack thereof, are part of the problem. After centuries of agricultural exploitation and the population’s demand for charcoal and fuel wood, 98 percent of Haiti’s landscape is deforested, leaving the country vulnerable to environmental disasters. In 2008, four storms in quick succession resulted in flooding responsible for 800 deaths and $1 billion in damage. The massive earthquake that same year killed more than 220,000 people.

Numerous studies have supported the link between deforestation and poverty in the country. One hundred thousand children under the age of five suffer from acute malnutrition, less than half of households have access to safe water, and one-third of the women and children are anemic. Everyone from conservationists to actor Sean Penn sees trees as the answer. The question is, which trees?

Some believe the answer could be moringa, a native of the Himalayan foothills in northwestern India and the latest imported ingredient anointed with “It Superfood” status (see also: quinoa, acai, chia). The tree—called variously “the miracle tree,” “tree of life,” “mother’s best friend,” and the “never die tree”—can shoot from seed to 15-foot stature in the span of a year; flourishes in hot, dry subtropical climates; and can be put to use from root to pod. Nutritionally, moringa has more calcium than milk, more vitamin C than oranges, more vitamin A than carrots, more iron than spinach, more potassium than bananas, and just as much protein as eggs.