More people, less erosion – Ethiopia’s Tigray region demonstrates that this can be a reality: They will take home the Gold Future Policy Award 2017, beating 26 other nominated policies to the prize. Also known as “Oscar for Best Policies”, the Future Policy Award highlights the world’s best policies that combat desertification and land degradation this year.

With unique collective action, voluntary labour and the involvement of the youth, people of Tigray are restoring land on a massive scale. As a result, erosion has decreased significantly, groundwater levels are recharged, and the uptake of sustainable agricultural practices made a significant contribution to food self-sufficiency and economic growth. 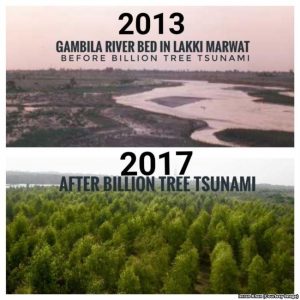 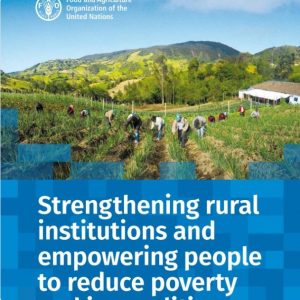 The majority of the world’s rural poor are family farmers, fishers, livestock and forest users who
live in isolated areas and who depend on agriculture and natural resources for their livelihoods.

Being both marginalized and geographically dispersed, the rural poor face major
constraints in seizing social and economic opportunities to improve their lives and
those of their families. This is especially true for women, youth and indigenous
peoples as they often bear the brunt of the socio-economic disparities that hinder
equal access to land, resources, education, information and opportunities to
participate in development processes.

The work of FAO on Rural Institutions, Services and Empowerment (RISE)
contributes to the Organization’s efforts to eradicate poverty, hunger and malnutrition
and to unlock the development potential of rural areas. This is tackled through the
promotion of inclusive, gender-transformative socio-economic development and
sustainable livelihoods in rural areas. 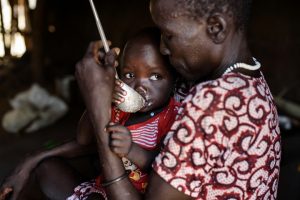 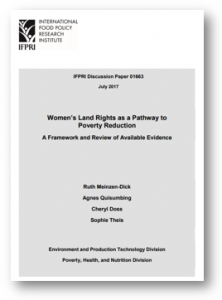 Land is an important asset for rural households, and having secure land rights is important for poverty reduction. Despite the large body of literature on the relationship between land tenure security, livelihoods, and poverty, most of this literature is based on household-level data and does not consider possible intrahousehold inequalities in land ownership. We know very little about the relationship between women’s land rights and poverty, not only because data on women’s land rights (WLR) are rare, but also because of the implicit assumption that women belong to households that pool resources completely. Thus, it is the land rights of households, not women, that matter for poverty reduction. However, growing evidence that households do not pool resources completely and that women have fewer assets than men warrants attention to the potential role of WLR in poverty reduction.

The new IFPRI discussion paper by Ruth Meinzen-Dick, Agnes Quisumbing, Cheryl Doss, and Sophie Theis, Women’s land rights as a pathway to poverty reduction: A framework and review of available evidence reviews the literature on WLR and poverty reduction. It adapts the Gender, Agriculture and Assets Project (GAAP) conceptual framework to identify pathways by which WLR could reduce poverty and increase wellbeing of women and their households in rural areas. It uses a systematic review search methodology to identify papers for inclusion, but adopts a more synthetic approach to assess the level of agreement and the amount of evidence within this literature. The paper examines the evidence from qualitative as well as quantitative studies on each of these pathways. Owing to the scarcity of experimental studies, the review of empirical work is based mostly on observational studies. Authors find some evidence on these relationships, but many of the key pathways have not been empirically analyzed. The evidence is strong for relationships between WLR and bargaining power and decision making on consumption, human capital investment, and intergenerational transfers. There is a high level of agreement, but weaker evidence on the relationship between WLR and natural resource management, government services and institutions, empowerment and domestic violence, resilience and HIV risk, and consumption and food security. There is less agreement and insufficient evidence on the associations between WLR and other livelihoods, and a higher level of agreement, but still limited evidence on associations between WLR and credit, technology adoption, and agricultural productivity. Notably, authors find no papers that directly investigate the link between WLR and poverty. Many gaps in the evidence arise from a failure to account for the complexity of land rights regimes, the measurement of land rights at the household level, the lack of attention paid to gender roles, and the lack of studies from countries outside Africa. Many studies are limited by small sample sizes, the lack of credible counterfactuals, lack of attention to endogeneity and selection bias, and possible response bias on questions of domestic violence and empowerment. There are very few rigorous evaluations of reforms that strengthened WLR. The paper concludes that gaps in the evidence should not deter the careful design and implementation of programs and policies to strengthen WLR, given the ongoing land tenure reforms in many countries. Different modalities and mechanisms for strengthening WLR could be tested, with appropriate counterfactuals. Program designers and evaluators can strategically identify pathways and outcomes where evidence gaps exist, and deliberately design studies to close those gaps.

Originally published on the Policies, Institutions and Markets website. 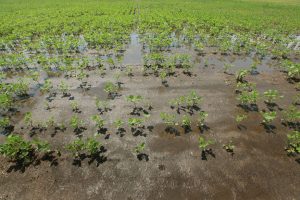 Droughts are expected to worsen and intense storms to become more frequent across much of the country in coming decades as the planet warms, but their impact on agriculture could be blunted if American farmers focus on their roots.

A new study, released Wednesday, examines the benefits of cover cropping—planting soil-enriching plants between crop cycles—and other soil-boosting practices used around the world, with a close look at Iowa, one of the Midwest’s top-producing agriculture states. The study determined that farmers could help their land better withstand some of the effects of a warming climate by making their soil more “spongy.”

“Spongy soil holds more water,” said Andrea Basche, the study’s author and a Kendall Science Fellow in the Union of Concerned Scientists Food and Environment Program. “What we found to be the most effective and consistent way to get more porous soil is keeping roots there.”

That certain practices help build soil health—including cover-cropping or “no-till,” in which farmers refrain from plowing soil—has long been understood in agriculture. But in the American Midwest, where corn and soybeans are the most widely grown crops, few farmers have embraced these practices. As little as 2 percent of growers in the Mississippi River basin plant cover crops, despite evidence suggesting they not only boost yields but also make soil more resilient to increasingly volatile weather.